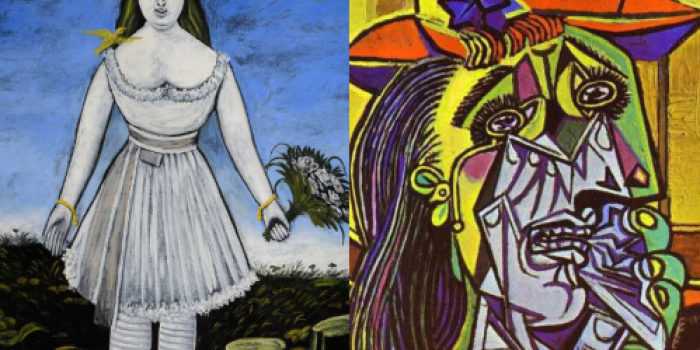 What Georgian Pirosmani and Spanish Picasso have in common

Niko Pirosmani was a Georgian primitivist painter. The paintings of Niko Pirosmani were not presented at museums but at inns, taverns, shops, etc. Throughout his life, Pirosmani was poor taking ordinary jobs including housepainting and whitewashing buildings. He also worked for shopkeepers in Tbilisi, creating signboards, paintings, and portraits, according to their commissions.

He usually painted on oilcloth. There are many works about merchants, shopkeepers, workmen, and noblemen groups. Pirosmani was fond of nature and rural life. He rarely painted city. He made many animal paintings. He was the only Georgian animalist. Pirosmani also was attracted by historical figures and themes such as Shota Rustaveli, Queen Tamar, Giorgi Saakadze, as well as ordinary Georgian people and their everyday lives.

Pablo Picasso grew up in a poor family. His father, a provincial drawing teacher who was training him, discovered the talent of Picasso at a very young age. After some sessions of art school in Barcelona and Madrid, Picasso spent his adolescence associating with the group of Catalan modernists who gathered at Els Quatre Gats in Barcelona. Later he moved to Paris where his work began to attract serious critical attention and praise by the time he was twenty. The greatest contribution of Pablo Picasso to art is the invention of Cubism that secured his immortality.

Surprisingly enough, Pablo Picasso created a graphic portrait of the Georgian painter Niko Pirosmani in 1972. However, the two never met each other. It was Ilia Zdanevich, a Polish immigrant, who showed a catalog of Pirosmani’s works to Pablo Picasso. Ilia Zdanevich left the Soviet Union in the 1930s because he could not conform to the regime and took a catalog of Pirosmani’s works with him. When Ilia became acquainted with Pablo Picasso, he showed this catalog to him. Picasso was so impressed by the paintings that he decided to create a portrait of Niko.