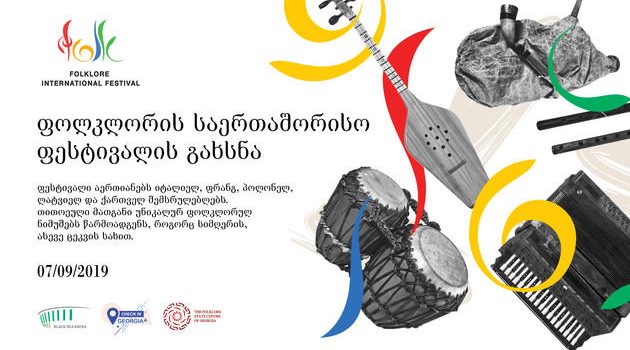 The International Folk Festival is set to kick off for the third time in Georgia. Under the scope of the government’s Check in Georgia program, the Black Sea Arena is to host the annual cultural event on September 7-9. The music celebration will be opened on the 7th with united concerts of Georgian and European ensembles.

Folk singers and dance ensembles from Georgia and abroad will be presented to listeners in Shekvetili. The festival follows perfectly Georgia’s reputation for preserving cultural heritage. This time round, the International Folk Festival features representatives of even more countries: France (Corsica) will be presented by Spartimu and Italy (Sardinia) by the Castelsardo ensemble.

The festival aims to support the popularization and preservation of Georgian folklore. Georgia, the homeland of polyphony and ever better-known for its extraordinary traditions and its people’s outstanding ability to sing and dance, in September is grabbing the opportunity to host other nations with equally important traditions of different styles of folk music. With numerous emerging musical genres, it is important to remember where it all started. That is why Georgia is ambitious to make its own land the location of an annual meet up for Georgian and worldwide folk music.

When done at the Black Sea Arena, the festival will carry on, traveling to the mountainous region of Racha, where united concerts of Georgian and European ensembles will be performed in Oni and Ambrolauri. This time, Georgia will be presented by ensembles Pesvebi from Adjara, Shilda from Kakheti, Shalva Chemo from Guria, Iavnana, Sagalobeli, Racha, Salaghobo from Lechkhumi, Lile, Lagusheda from Kvemo Svaneti, Dziriani, and Basiani from Tbilisi. The closing performance of the festival will be given by Georgian Ethno Jazz group ‘Egari’.

The continuation of the International Folk Festival scheduled in Racha will also feature four foreign ensembles. “Spartimu” from France, “Castelsardo” from Italy, “Koniakow” from Poland, and “Ackups” from Latvia. Seminars will be led by famous ethnomusicologists Polo Vallejo and Renato Morelli. For foreign and local guests, masterclasses will be given by Giorgi Donadze, Levan Berelidze and Professor Natalia Zumbadze.

Tickets will be available on tkt.ge.