Why Tbilisi’s One of My Favorite Cities in the World

THERE ARE CITIES that make sense. The streets glide along straight, clean lines, their names uniform from start to finish. Bridges are crossable. Signs point in the proper direction.

Riotous and anarchic, the capital of Georgia is anything but organized. Locals use Soviet-era street names—Leselidze, Davitashvili, Perovskaya—found only on decades-old maps. Wine is sold in repurposed Coca-Cola bottles for a dollar a liter from boulevard underpasses. The electricity still cuts out in the heart of the “Kala,” Tbilisi’s historic old town.

Despite this—maybe even because of it—this city is one of the best, most strikingly original travel destinations in Europe or Asia, if not the world.

Pop into an unmarked courtyard near the Armenian Norashen Church—overgrown with ripe pomegranates—and find yourself among well-fed stray cats in a bohemian artist’s studio (one of the workers may invite you for home-brewed, noxiously alcoholic chacha; he will not let you refuse, nor should you wish to).

Sneak into the basement of the red-brick seminary across from Sioni Cathedral and buy Tbilisi’s best bread—dough thrown against the scalding sides of a circular tone oven—from an elderly kerchief-wearing woman for 30 cents a loaf.

Head up a slanting set of town house stairs in the fin de siècle neighborhood of Sololaki and find yourself in a speakeasy-style apartment café called Linville, where tables hide behind vines on wrought iron balconies and afternoon tango milongas take place under decorative Victorian parasols.

Slip across the Dry Bridge, past the ruined frescoes of the former Grand Hotel, to the flea market and bargain with bearded ex-professors for wooden icons, Soviet-era gas masks, and Turkish tea glasses. Come more than once and the vendors will remember you (I buy my jewelry—traditional Georgian enameling—from the same seller every year; she recalls not just my taste, but that of the mother and grandmother I purchased gifts for).

The cliché, of course, is that Tbilisi represents the epitome of East meets West: a Silk Road crossroads where Arab, Ottoman, Mongol, and Russian imperial forces each left their own distinctive cultural mark. And in the heart of the old town, where rugs dangle from whitewashed wooden balconies and bearded Georgian Orthodox priests jostle with tourists on narrow cobblestone streets, it’s a compelling fantasy.

But the city’s reality is far more complicated—and intoxicating.

“East” and “West” are all but meaningless terms here, where the ancient fortress lording over old town has been used both by and against each set of conquerors, where the horizon—and the snowcapped Caucasus beyond—is punctuated by smoky Soviet tower blocks.

On Grishashvili Street, near the sulfur bathhouses—traditionally staffed not by ethnic Georgians, the by-far majority in this famously tolerant city, but by Muslim Azeris—a half-hidden chaikhana, or teahouse, serves baklava at carpeted banquettes before an open fire. A five-minute walk along the Kura River leads to Tartine—a French brasserie popular with expats and well-heeled locals alike—and café au lait delivered in gargantuan bowls. And at KGB, a restaurant whose tagline is “We’re still watching you,” Soviet kitsch takes on a hipster vibe.

Not all locals are as gleefully tongue-in-cheek about their city’s past, however. Shopping at the bazroba (bazaar), or feasting on caraway-spiced khinkali meat dumplings in wood-paneled working men’s taverns, you’re as likely as not to be dragooned into someone’s rhapsodic ode—in a mixture of Russian, Georgian, English, and fervently expressive gesturing—to the beauty of the mountains, the Virgin Mary, Mother Georgia, the tradition of hospitality, or women who happen to be in the vicinity.

But few places capture Tbilisi’s energy like the city’s hottest new restaurant, Café Littéra—brainchild of new celebrity chef Tekuna Gachechiladze—located in the palatial mansion that once housed the Soviet Writers’ Union. The food—chakapuli stew made with mussels instead of the traditional lamb, pomegranate-dusted river trout served a la tartare, classic badzhe sauce made, all but blasphemously, with almonds instead of the customary walnuts—reflects the best of Tbilisi’s breathless fusion culture.

Sure, the electricity might still go out at times.

But Georgians will light candles, shrug, and pour you another drink. 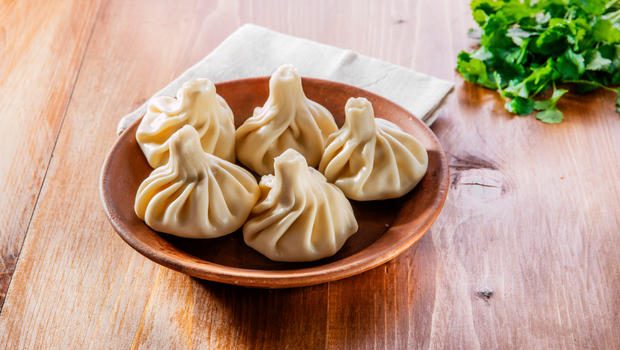 o holiday in Georgia is complete without trying khinkali, one of the most traditional dishes in the country.

With the help of a specialist chef, ‘Taste’ reporter Claudio Rosmino discovered its history, how to prepare it and the special technique to enjoy what is basically a big, tasty dumpling, filled with meat.

Khinkali was traditionally the food of shepherds in the mountains but then it became popular nationwide.

Usually, you eat it in specialised restaurants, like the one visited in Tbilisi by ‘Taste’.

Reporter Claudio met Malkhaz Tsikolia, the head of the kitchen at the ‘Tsiskvili restaurant’, and asked him about where khinkali comes from.

“Khinkali is a Georgian dish produced many years ago in the mountain regions,” the chef explained.

“It quickly became the favourite dish of the whole country and nowadays people from many other nations visit Georgia to taste real khinkali.”

So how is Khinkali cooked and what ingredients is it made of?

“Then we insert minced beef and pork and some spicies. You seal the dough with the meat inside. You put it in boiling water and in seven minutes it is ready.”

Khinkali is something of a work of art because of its fascinating shape. A delicate touch is required in its preparation. Not everyone has got it – as Claudio discovered when he tried!

There are several varieties of khinkali, with pork, beef or lamb, but there are also vegetarian versions with cheese or mushrooms.

While the cooking is quite fast, preparing the ingredients requires several distinct stages.

In the kitchen, everyone must be coordinated, like in an orchestra, in order to produce hundreds of these traditional Georgian dumplings per day.

And when it comes to eating, the challenge is not to spill any of the tasty juice. The aim is to have as little juice as possible fall onto the plate. And for that you really need to master a special method, which chef Malkhaz demonstrated for Euronews.

“Then you drink the juice – and it’s really very good!”