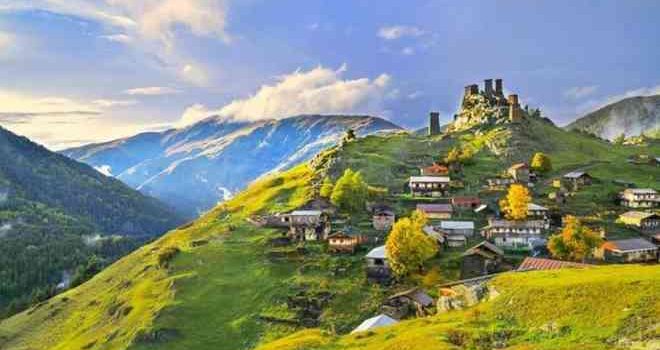 The Daily Beast about Tusheti: The Last Wild Place in Europe

The Daily Beast has recently published an article about Tusheti, a historic region in northeast Georgia. Benjamin Kemper, the author of the article claims that the venue is the last wild place in Europe. He had visited Georgia many times but Tusheti had always been out of reach. The road to Tusheti is one of the most dangerous drives in the world.

“Even at the height of summer, it takes six hours of nauseous off-roading from the nearest town to reach the first Tushetian hamlets, and once you’ve arrived, you can all but forget creature comforts like cell service, internet, ATMs, and heat. But I was sold: The promise of an off-the-grid adventure in one of the last truly wild corners of Europe was too enticing to pass up,” reads the article about Tusheti.

The intact nature of Tusheti awaits visitors. The area is inhabited by “mountain goats, imperial eagles, brown bears, and, if you’re lucky, rare indigenous species like the Caucasian black grouse and East Caucasian tur, a goat-antelope with horns so enormous they look like they belong on a triceratops. There are even occasional, if uncorroborated, Persian leopard sightings.”

A herd of animals is moving forward on rocky slopes of the Great Caucasus Mountain and the scene can be observed from almost any place in Tusheti. The centuries-old towers will amaze visitors by their greatness and long-standing history. The towers used to be refuges protecting the locals from invaders or fatal avalanches.

“Medieval Tushetians did not mess around—they had their freedom to protect. From the earliest written records until well into to the 17th century, they enjoyed virtual autonomy as a tribal democracy. Although Tushetians coexisted fairly peacefully through the centuries with neighboring tribes such as the Chechens, Khevsurs, Lesghians, and Hinukhs, and traded often with them, they remained culturally distinct with their animist deities, transhumant lifestyle, fast-footed dances, and twangy dialect,” reads the article about the history of Tusheti.

Upon the hills, one can find a cluster of shrines called khatebi that is allegedly dedicated to Pagan-Christian demigods. Meanwhile, visiting a family in Tusheti will definitely involve tasting the traditional lamb-stuffed khinkali (Georgian dumpling).

Interested in the future of the region, Nugzar Idoidze, one of the locals of the village Omalo in Tusheti cheers the author up by saying that since Tushetians survived the Soviet pressure, they can survive anything.

The Daily Beast is an American news and opinion website focused on politics and pop culture.