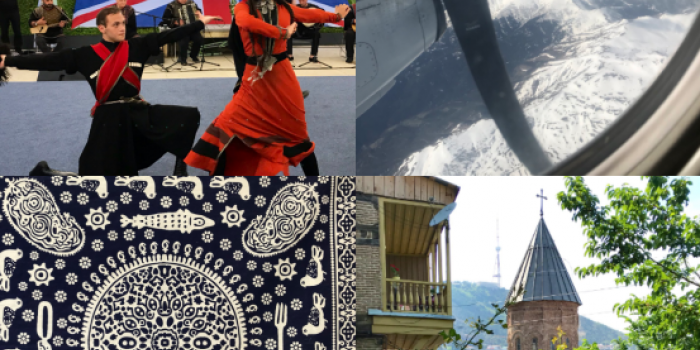 A few things why you should visit Georgia by British Ambassador

Justin McKenzie Smith, a British ambassador to Georgia has recently posted photos of Georgia on Twitter with the caption: “These are a few of my favorite things. #VisitGeorgia #WorldWelcomeToGeorgia #SpendSummerInGeorgia”. The photos reflect Georgian traditional dances, Old Tbilisi, Looking over Georgian mountains from an airplane and Georgian blue tablecloth.

The campaign ‘Spend Your Summer in Georgia’ has been launched by Georgian activists together with businessmen and international society in response to the ban on Russian airlines from carrying Russian citizens to Georgia from July 8. The campaign aims at popularizing Georgia as a travel destination to tackle the possible difficulties due to the decreased number of incoming Russian tourists. Besides, Russian tourists have encouraged their Georgian friends by saying that they will find other ways to reach Georgia.

The ban was followed by the cancellation of the Inter-Parliamentary Assembly on Orthodoxy. The assembly was led by the President of the Inter-Parliamentary Assembly on Orthodoxy, Sergei Gavrilov, a deputy of the Russian Duma from the Communist Party. Angered by the presence of Sergei Gavrilov in Georgia, citizens gathered at the Parliament building in Tbilisi to protest Russian occupation in Georgia.